I used to brag about Arduino YUN being the IoT enabler. Then came along super cheap ESP8266 but there was an entry barrier to using it as it seemed like someone who is proficient in Electronics only could make it work. Then came companies like Adafruit, Sparkfun, etc who spoon fed the makers with a version of ESP8266 suitable to their skill level. Prior to this I wanted to experiment with it but never did. Then I procured 3 Adafruit ESP8266 Huzzahs and played with LUA programming. Arduino IDE supporting the ESP8266 was icing on the cake as anyone who has worked on Arduino could now work on ESP8266.

Although I have a degree in Electronics Engineering and have done programming in school and college, I have never worked in that field as I work on Computer Networks. I consider makers to be “Jack of all trade, Master of one”, so rather than learning all technologies associated with making, it is helpful if you get related stuff from people who have already done it. So when I find something which has not been documented and can be helpful to others, I write about it. If you have read my post on “Control Input Output of Arduino Yun with AJAX“, I wish to achieve something similar in this article. This post could not have been possible without the help of “ESP8266 Tutorial” as working with YUN HTML is easier than working with HTML on ESP8266. YUN has a separate HTML file and INO file. ESP8266 is having just one file and to put tons of HTML code in it is difficult. The above mentioned article describes how to easily do that.

Inputs and Outputs to the ESP8266

We will use one Digital Input, one Analog Input, One PWM Output and couple of Digital Outputs. I will not go into much details as to how to use the inputs and outputs as if you have reached this stage, then you probably know how to program inputs and outputs and the way they are connected to the ESP8266. All the components are basic so you should easily have it. 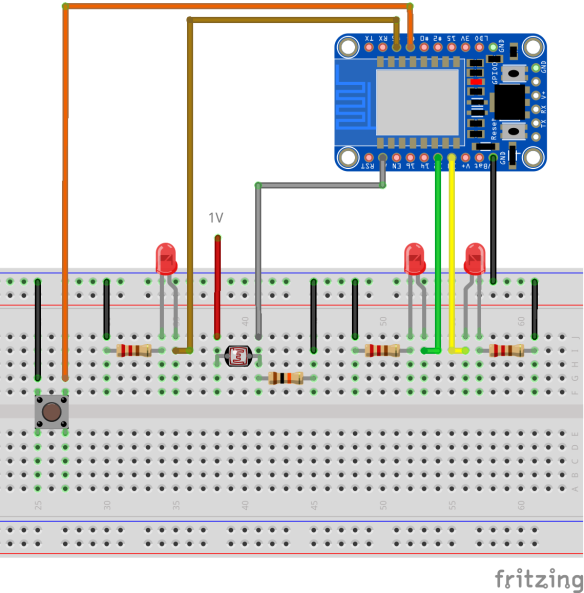 1) Digital Input: Pin 4 of the ESP8266 will be used as a digital input. This means that pin 4 will sense a 1 or a 0 on the pin. Depending on the input, the text of the output on the web page will change asynchronously i.e. without page reload. For this purpose, we will use a simple push button switch. When pressed, the output will be OFF as it is connected to GND and when released, the output will be ON due to Input Pullup.

3) Analog Input: ESP8266 has only one analog sensing pins denoted as A and used in IDE as A0. We will connect an LDR to it. This will give varying values depending upon the brightness around it. The Analog input is limited to 1V so you to scale down the analog signal accordingly.

4) Analog Output: We will connect another LED to pin 5 of the ESP8266. The way ESP8266 provides analog output is through PWM which means when we change the value of the input on the web interface, the Duty cycle of the Pulse Width Modulated signal changes hence giving the effective output of analog change. When we change the slider on the page, the brightness of the LED will change.

The Web Interface consists of either user input to the ESP8266 or change in the status in web page depending on status of pins.

Analog Input: The text box field will reflect the values of the Ambient Light brightness in Lux.

Digital Input: This value will change from Off to On depending upon the status of the Digital pin 4.

PWM Output: PWM output from a pin has a value ranging from 0 to 255. The slider sets the value of Pin 5 from 0 to 255. Also, the text below it shows the current value of the output.

Digital Output: We have used Pin 12 and 13 as output on ESP8266. The output will change depending upon what we do to the GPIO 12 and 13 on the page. If we click the button once, the output on the pin will toggle to digital one and the button text below will change to On. Click once again and it will toggle the pin to digital zero and reflect the change on the page by turning button text Off.

You can find the INO file here and the library file here.

Opening and saving the INO file will create a folder for itself in Arduino folder. You will have to copy the folder indexl (containing the indexl.h file) in the Arduino Libraries folder.

The HTML code is present in the indexl.h file in a format which can be understood by the ESP8266. We will take snippets of the code and discuss it here. First we will look into the code that makes the page. We will not go into the details as to the formatting, just the things which form part of the interaction.

This is the text box below “Ambient Light in Lux”. The important thing to note here is the id and the value. The script requires that we have an id and a value so that we could reference it into a script and change its value.

This is the text below GPIO 4. The current text is On but as soon as the script will run and the status of pin 4 will change to 0 depending on push button press, the text will be replaced by Off. The script will reference the id of text4 to change the text.

These codes are representing the GPIO 5 slider. The first field is hidden which means you will not see anything about it but it is important because it has a value and an id which will be referenced later. The second line is the code of the slider as depicted by the input=range. The starting value is 0 and the ending value is 255 and the step is 1. 0 to 255 represents the values PWM can take. Also, moving the slider will cause an event “sendDAC” which will send the current value of the slider with the value of pin5 to the script. We will discuss the scripts later on. valueDac5 (the number below the slider) currently has a value of 0 but will be replaced by another value depending upon the output of the script.

There will be many times we will get response from the ESP8266 and we will place that in the id description so that we can see the communication.

Code for Auto update of Status

The above portion is the script part of the html code. When the window will load in a user PC, the “Pinstatus” script will run. This script calls another script “morestatus”.

The timeout on the script causes it to run every 4 seconds. You remember the description field in the previous section at the end. That description will be replaced by “Processing Status” in the page by the innerHTML attribute. The “request = new XMLHttpRequest()”creates a new request and on a state change, it calls another script “updateasyncstatus”. “request.open(“GET”, server, true)” creates a GET request with a value of server which in total amounts to “http://ip address of ESP8266/status/99”. Also, the true indicates that it is an Asynchronous request which means the page will not required to be reloaded. “request.send(null)” sends the created request to the ESP8266.

The script updateasyncstatus updates the state of the page i.e. all the parameters we were talking about before – the text, text boxes, the sliders, etc.

In the following “for loop”, we will further segregate the values to make them usable. The for loop will run as long as the length of the response received.

document.getElementById(ActNum).value = PinAct” will change the value of action12 in main HTML to 1. What this will do is the next time when you click on GPIO 12 i.e. pin12, it will send a value of 1 as currently its value is 0. This makes it a toggle switch.

“document.getElementById(TxtNum).innerHTML = text;” will change the text below button 12 to be Off as pin status is 0.

In the case of pin 4, since it is not a toggle switch, we do not require PinAct. If Pin status is 1, text2 in the HTML will be replaced by On and vice versa.

The Page updates the status of pins asynchronously every 4 seconds. The following script will change the status of the pin when the button (12 or 13) is pressed and it will also command the ESP8266 to change the digital output (pin 12 or 13). When we press pin 12 for example, the script sends 2 values with the script. The 2 values – “pin number” and “action” will be used here. (Note: The following explanation will use pin 12 as an example with a pin state of 1.)

Code for Changing PWM Output and Auto update of Slider

The following script kicks in when the value of slider 5 changes. The event will send 2 values i.e. Pin=5 and value=position of slider

The above code creates and sends a request to ESP8266 as “http://ip address of ESP8266/dac/5/190 and runs script updateasyncDac. What this function does is change the value of slider and the value below it.

// Create an instance of the server
// specify the port to listen on as an argument
WiFiServer server(80);

65 thoughts on “Control Input Output of ESP8266 with AJAX”